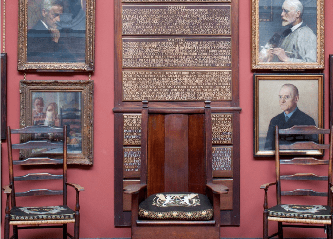 11.00am
Lara Artemis
Inside the Parliamentary Archive

Parliamentary records are at the heart of our democracy. They have embodied our liberties, rights, and responsibilities for over five hundred years. The Parliamentary Archive documents the workings of Parliament to enable it to be more efficient in its approach to managing information and is open to the public. In her talk, Lara will give a brief overview of the structure of the archives, including roles and activities; its history and the materiality of the Parliamentary Archive collection, including current conservation issues and future challenges around balancing preservation with access; and how this fits into the wider discussions around Parliament’s Restoration and Renewal Programme for the Palace of Westminster, the home of the UK Parliament.

Laura has worked in conservation for nearly 25 years and has been an accredited book and paper conservator-restorer since 2004. She is currently the Collections Care Manager responsible for the conservation and preservation of archive collections at the Houses of Parliament. Her expertise is in parchment conservation; her work at the Parliamentary Archive includes facilitating exhibition loans, reviewing preservation storage and other requirements around large scale collection moves, and assessing collection care needs during digitisation. She has also published and teaches widely on the subject.

12.00
Alan Powers
The Ark of the Arts and Crafts: The History of the Art Workers’ Guild

The Art Workers’ Guild has been a regular meeting place and ‘home’ to Designer Bookbinders for over forty years - indeed, it was for many years our mailing address in London. But what of the history of this fine Victorian institution where we have met for so long? The AWG was founded in 1884 to be a gathering place for practitioners of what had previously been separately categorised as ‘fine’ and ‘applied’ arts. It recognised shifts in the late Victorian period in how different forms of art production were valued, and their potential for enlivening architecture through decoration, for setting standards in industry and commerce, and, not least, for reforming education. Fine printing and bookbinding have always been represented among the many occupations of its members.

Alan is a former Hon. Librarian of the Art Workers Guild and one of its principal historians. He teaches on various courses concerned with architecture, and is the author of many books. In 2018, he will publish Enid Marx, The Pleasures of Pattern (Lund Humphries) and Bauhaus Goes West (Thames and Hudson). In 2004 he edited The Selected Poems of John Betjeman for the Folio Society, and was a judge for the DB competition in 2005, when Betjeman’s Poems was the set book.

For over forty years David Sellars was a leading light in the world of artistic bookbinding. Latterly his work expanded into new territory as he collaborated with his wife Jill, a creative marbler. In her lecture, Jill will talk about David’s bindings during the years they spent together and their collaborations, which evolved through his aesthetic resonating with the non-representational art of her suminagshi marbling - the ‘chance operations’ in John Cage’s meaning of the term. She will discuss his philosophical approach to the medium, his design themes and the binding constructions he developed. Jill will discuss his commitment to the traditional materials of leather and paper and give insights into the personal development which led him from work in the carpet mill in Halifax to the world of prize winning literature.

Jill studied bookbinding with Dorothy Cumpstey at St Mary’s Teacher Training College, and went on to work with Paul Delrue, with whom she founded the North Wales Region of the Society of Bookbinders. She is a self-taught marbler, and has developed her marbling style through the intervening years. Since retiring from the Civil Service she has had the opportunity to develop her experience as teacher, working one-to-one and running workshops at The Grange in Shropshire.

3.00pm
Ian Andrews
Fans, Tulips, and Lace: The Representation of Fashionable Commodities in Gold Decoration on Books from 1500 - 1800

This talk will demonstrate that gold designs on book covers closely followed the appearance of the most sought-after items of the 16th - 18th centuries. During this period, gold-tooled designs reflected the evolution of lace from simple patterned strips to the elaborate collars and flounces worn by followers of contemporary fashion. Changes in the construction of fans and the appearance of tulips, both highly desirable commodities, are equally apparent on book covers of the period. It will be shown that fluctuations in the popularity of these objects coincide with their occurrence as design features on book covers.

Ian originally worked in various areas of scientific research at the National Physical Laboratory and IBM. Old books have always fascinated him and he took courses on restoration and gold tooling with John Mitchell. This led him to study gold tooled covers of the 16th-18th centuries and to discover how designs in gold mirrored the enthusiasms for the most sought after collectables and the times when each was especially in vogue.